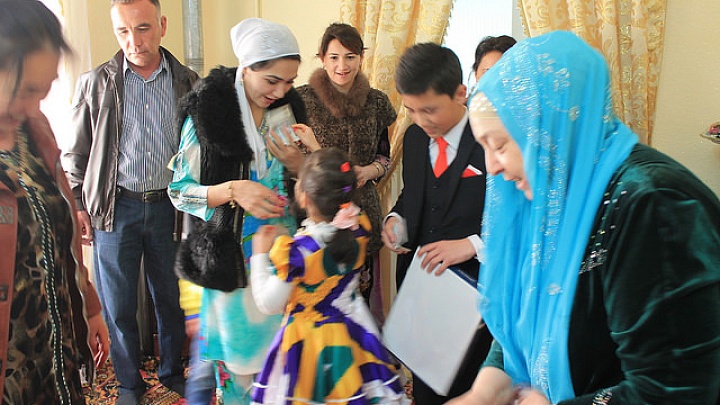 When it comes to foreigners traveling to Syria to join ISIS, worldwide media tends to focus on the Europeans, especially the girls. Writing about young women being lured by false promises of love certainly draws in readers. But they are not the only vulnerable ones being targeted. Central Asians from Russia are joining the ranks of those being recruited by ISIS.

Workers from Central Asian countries such as Tajikistan and Uzbekistan migrate to Russia looking for work. Once these migrants from the former Soviet republics arrive, they are often only able to find low paying jobs due to lack of experience as well as knowing little to no Russian. Much of what little money is made is sent back home to their families. In addition to the poor work situation, these workers also have to deal with Russia’s notorious xenophobic attitudes. Even before the current economic crisis, these workers have led tough lives in Russia. Migrants from Central Asia have long been treated with disdain in Russia. They are viewed as a lower class of people, much like Blacks in early 20th Century America. But like so many all over the world driven by economic despair in their home countries, these migrants traveled looking for work to support their families.

Since Russia’s economic downturn many of these workers have lost their jobs. And many have experienced harassment at the hands of Russian authorities cracking down on migrants. Russian officials cite regulation enforcement as the reason for the crackdown. In order to work in Russia, these migrant workers have to deal with a myriad of paperwork and fees. It is not uncommon for workers to be rounded up in searches for illegal immigrants or even those whose paperwork is not in order. 2014’s Operation Migration was one of the most recent of such round ups, during which many workers reported harsh treatment up to and including severe beatings. It is not surprising that those who could have fled Russia, going back to their home countries. The migrants who could not leave face unemployment, loneliness, and fear. And this is exactly what ISIS recruiters are using to their advantage.

Far from home and alone in Russia, these workers look for whatever they can find that is familiar. ISIS promises these poor migrant workers that a better life awaits them in Syria.

Central Asian migrants in Russia turn to the familiar, either in local groups or online communities. Far from home and alone, these workers look for whatever they can find that is familiar. Often, this is either a local mosque or online communities. In these places the workers find people with similar backgrounds, language and religion. The under- or unemployed migrants find a connection, but are also susceptible to the messages of radicalization. ISIS uses these mediums to tell these poor migrant workers that a better life awaits them in Syria. They will have jobs, but more importantly they will be able to fight against an oppressive regime for the establishment of an Islamic state. The socioeconomic situationfaced by the migrants is one of the biggest factors used by ISIS to recruit Central Asians in Russia. The desperation of some workers may lead them to become “indebted” to the recruiters. Not widely reported in the recruitment tactics is the offer to help the migrants with their work status. In exchange, the migrants are obligated to attend sermons by certain religious leaders. This all but guarantees the migrants hear the “right” message.

Preying on the Central Asian migrants’ vulnerabilities is only part of the story. Why are ISIS recruiters working in Russia rather than in Central Asian countries themselves? In many of those countries, radical Islamic groups have been banned. Unable to operate openly in the Central Asian countries, they establish groups in other place to recruit for their cause.While not directly linked to ISIS, one such group is  Hizb ut-Tahrir. They are an Islamist group who supports the establishment of a caliphate, although they insist their support is through peaceful means. Whatever their ideology and methods, they have in recent years set up cells in cities, like Moscow, where large populations of Central Asian migrants have settled. The migrants are attracted to groups like Hizb ut-Tahrir because of the connection to their home countries. Religion plays almost a secondary role – a common bond – in the recruitment where much of the emphasis is on financial security and freedom from the anti-immigrant attitude of Russia.

There are no solid estimates of the number of Central Asians fighting for ISIS. Numbers range anywhere from low hundreds to nearly 4000. It is unclear how many of these fighters have come from Russia because of the large number of migrants in the country illegally. Regardless of legal status, these migrant workers in Russia continue to be a target for ISIS recruitment. Their vulnerability makes them easy prey for recruiters promising better living in Syria under the caliphate. The combination on the economic conditions in both the Central Asian countries and in Russia, as well as the anti-immigrant attitude in Russia, all but ensures the recruitment of migrants will continue.

This article originally appeared on The View from Here on 13 April 2015.

The Other C-Word: Caliphate