For Refugees in Turkey, A Tipping Point Looms 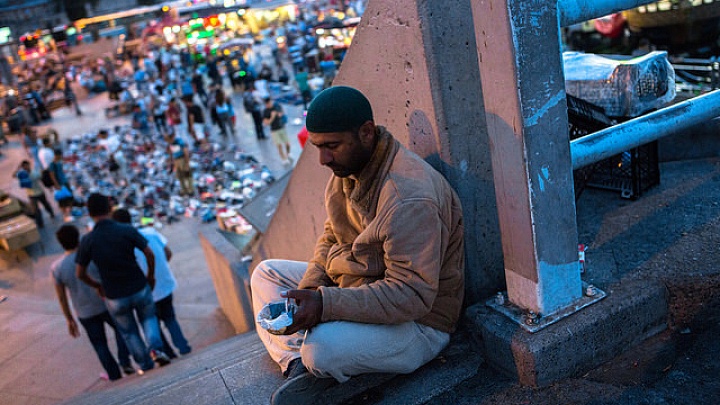 On a clear day, she can climb up the hill with her mother to the mosque and get a glimpse of home. Thirty miles away the once densely populated city of Aleppo now sits vastly empty, its minarets on the horizon betraying a spectacle of normalcy. It is a home that Fatima (her name has been changed) can see, but one that could not feel farther away. Her war-torn country of Syria has made her family one small part of the more than 1 million unwilling refugees living in Turkey. Now reliant upon donations from non-profits and the little cash that trickles in when the men in the family find work, her mother wonders if the war will ever end. I had to wonder the same.

She now calls a makeshift tent, comprised of blue tarps on a hill overlooking downtown Kilis, home. Straddling Turkey’s southeastern border with Syria, the town has become the epicenter of a growing humanitarian crisis. Conditions in the government-run camp – touted, as the “perfect” refugee camp in early 2014 – are deteriorating quickly. The camp was said to be completely full in June when I visited.

Known for its hospitality, Turkey left its borders open and gave visitor status to all Syrians fleeing the fighting. Scarred by firefights between the Assad regime and the opposition forces, most Syrians I spoke with fled their beloved country with only what they could carry. Many left believing it would only be a few months before they could return to their normal lives. Turkey welcomed them believing the same. That was two years ago. Many chose Turkey because it was easy to enter, but now they are finding life after crossing over anything but easy.

Known for its hospitality, Turkey left its borders open and gave visitor status to all Syrians fleeing the fighting.

Multiple barriers stand in the way of things like gaining employment and finding affordable housing. While Turkey’s guest status seemed welcoming at first, by not declaring Syrians as refugees, most were unable to provide the necessary documentation to legally work inside the country. Language differences also stand as a hurdle between the displaced Syrians and local Turks. Syrians speak Arabic which looks and sounds nothing like Turkish. According to my interpreter, Ola, a refugee herself, there is a push to teach English to the refugees to make them more employable. But jobs are few and far between and locals are growing more resentful about how the crisis is impacting their own well-being and wallets. Like the Iraqi refugees who flooded Amman in the 2000s, wealthier Syrians who can afford housing in Kilis and Gazientep are now being accused of raising rent prices and forcing Turks from their own neighborhoods. According to refugees and locals in Kilis, tensions are growing. Both groups worry about hitting the tipping point.

And for every girl like Fatima I met, there are women afraid to have their photo taken for fear of being sold into the increasingly rampant sex trade, families unable to leave their tents for fear of looting, children begging, refugees without potable water, illnesses, injuries, hunger, fear, and sadness—a sense that home may be forever lost. Violence and fighting between the two populations has intensified since my return. In nearby Gazientep, violence between the Syrians and the Turks has caused Turkish protesters to take to the streets against refugees. The clashes have the Turkish government now moving refugees to tent cities nearby.

When asked, refugees, especially women, quickly reply that they would rather go home. And men nursing their wounds in the local refugee hospital want to return to the fight. The 4,000 to 6,000 refugees queuing every day to receive food rations from Kimse Yok Mu, a Turkish NGO, surrounded us asking: Why were conditions so poor?

As the crisis continues in Syria, fears in Turkey, Lebanon and Jordan rise. Turks believe the total number of “official” refugees residing in their country is grossly lower than reported. And with Lebanon considering closing its borders to Syrian refugees, the number seeking refuge in Turkey could grow exponentially. Criticized for not creating a long-term plan, many are asking the Turkish government how it’s going to deal with the ramifications of a Syrian war with no end in sight. Standing under the blue tarps, it’s hard not to contemplate this life through the eyes of a child like Fatima. She did not want to leave her home in Aleppo, which may not even be there anymore.

Syria’s refugee crisis has been overshadowed by the growth of ISIS in Iraq and violence in Gaza. But with Turkish hospitality waning, there may be a breaking point soon.

Melissa Harrison is the Communications Director for the NRDC Action Fund. She traveled to Turkey as a Truman National Security Project partner with the Rumi Forum. This is one blog in a series she is writing about her journey. If you would like to help Syrian refugees living in Turkey please visit: http://bit.ly/1rr6nJD

Would Cicero Have Approved of Putins War ...