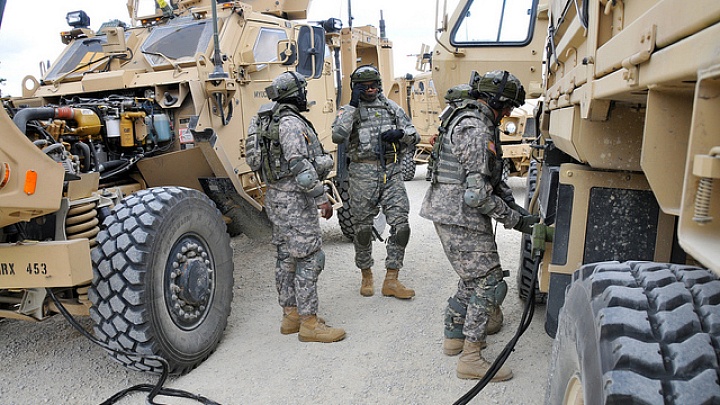 Military types like me have been bemoaning the risks to U.S. military readiness imposed by current and unabating federal fiscal constraints. The concept of military readiness nevertheless probably does not adequately resonate with the average American to put those risks in context. Readiness, after all, is not a common term, and even some in the national security business do not seem to appreciate its perishability and significance, if only because the U.S. military always seems to answer the call, whenever and wherever it comes. But even if readiness is conceptually squishy, what’s at stake is real and substantial. Readiness does not guarantee victory; but, at best, an un-ready force takes longer to win, assuming the enemy allows for that. At worst, an un-ready force loses.

Ready or Not: The Readiness Equation

When a starter cries “Ready, Set, Go!” to begin a race, he is telling the runners first to approach the starting line, then to assume their starting positions, and finally to run for all they are worth. But being ready to be ready, even in this case, requires a great deal of preparation before the runners are ever within earshot of the starter. Being ready to be ready for military operations is even more complex. Whether we’re talking about F-35 pilots, infantry soldiers, or submariners, they cannot simply throw on their uniforms and be ready to go for all kinds of reasons, not the least of which is the fact that none of these warriors can operate alone.

“Go, Set, Ready” flips the traditional starter’s admonition on its head, as an inspirational way of encouraging us all to lean forward in our personal lives before we feel completely ready, so that waiting to feel ready does not stop us from moving altogether. But that sort of risk-seeking approach is no way to manage any kind of a team, never mind a nation’s military forces. In fact, effective military force management is all about maintaining readiness in a calculating, risk-averse way, in order to avoid much worse than the thrills and potential spills that come with a “Go, Set, Ready” lifestyle.

A force not ready to project strength and decisively engage our enemies and other challenges to our national interests, whenever and wherever the needs arise, is a force with no force at all.

So how do we do the calculating necessary to maintain military readiness? What’s the equation? I would express it like this:

Let’s break each of those factors down.

Readiness begins with personal preparedness, because it establishes an individual’s fitness for duty, in part simply by limiting the distractions. Preparedness dimensions include physical, medical/dental, mental, financial, legal, family, and probably others, and we must demand them as we recruit the force and facilitate them as we sustain the force. But personal preparedness only gives us individuals who are easy to manage, not warriors who are ready to fight and win. Empowering the force for mission success requires all the additional factors, starting with equipment.

As we turn to equipment, it is important to recognize that capabilities are different than readiness. In fact, even the most eye-watering cutting-edge capabilities can fail to contribute to readiness, if those capabilities do not reside in functioning equipment appropriate to the mission tasks at hand. Give an infantry soldier an F-35 and you are not helping him to be ready. Give an F-35 pilot an F-35 without an engine and you come up short in the same way. We must give our warriors equipment that is appropriate and fully functioning.

Next in the readiness equation are training and qualifications, which must first be appropriate, like equipment, and then comprehensive. Train an F-35 pilot to field strip and reassemble an M-16, and you are wasting your time and hers. Train her only to launch and land the jet and not to employ it in large, composite force-on-force scenarios, and you are wasting more of your time and hers. We must give our warriors training and qualifications that are appropriate and comprehensive.

The final and “squishiest” factor in the readiness equation is “currency”, which, like readiness itself, is another uncommon term. But training completed by our warriors is merely a collection of bullets for their resumes, rather than for their guns, if we don’t also keep our trained warriors current.

What is currency? It is simply the same kind of recency of experience you would want from any professional providing you with a complex service. I am trained as an F-15E pilot, but I have not touched a Strike Eagle since March 2000, and even though I remember the experience vividly, you should not trust me to fly the jet today. As it is with any complex set of tasks, flying and employing a fighter jet, driving and employing a tank, or clearing a building room by room in the dead of night is not like riding a bicycle. It does not just come back to you. Take lack of currency far enough, and you have to re-qualify people altogether.

Lack of even basic currency was part of the challenge faced by the Air Force during the summer of 2013, after budget cuts grounded 31 flying squadrons for more than three months. But, as the service’s Chief of Staff, General Mark Welsh, has made clear, even its recent combat experience in Iraq and Afghanistan has made the Air Force less ready for a high-end fight with a capable adversary, because the relatively low-end combat operations required the last 13 years have limited the opportunities for full-spectrum training. We must enable our warriors to maintain currency that is comprehensive and appropriately frequent.

Add to the lack of full-spectrum currency across the military services their simultaneous backlog of maintenance, modernization, and recapitalization, coupled with the ongoing budget crisis and a continued high operations tempo, and you have a readiness crisis. As recently as last month, the Navy swapped two aircraft carrier deployments, because the scheduled and very expensive ship simply was not ready to go. Given what he calls the increasing “velocity of instability,” the Army’s Chief of Staff, General Ray Odierno, recently said that his worst fear is the possibility of having to deploy soldiers whether they are ready or not, when demands around the world and the diminishing size of the force combine to mean that swapping one unit for another is not an option.

Mackenzie Eaglen, a resident fellow at the American Enterprise Institute, recently suggested that policymakers need to recognize the prodigious baseline benefits produced by military strength and readiness, and then provide steady, predictable funding to sustain those benefits, by enabling the U.S. military to stay steadily ready, and thus to provide steady, positive influence around the world. As U.S. defense spending and military readiness vacillate, Eaglen argues, so too does global stability, and with it the solidity of U.S. national interests.

U.S. military readiness should therefore be treated like an unparalleled investment, to keep faith with Americans serving in uniform, but also because it makes unparalleled good financial sense – because of the benefits, and because maintaining readiness is less expensive than recovering readiness.

Too often, however – and especially in war-weary times like our own – military readiness is treated like low hanging federal budget fruit, with no calculation of the net losses after we count the initial defense savings. At the first hint of peace, policymakers are all too happy to raid military coffers to reinvest the so-called “peace dividends,” without recognizing that peace anywhere is only temporary at best and often illusory, and without slowing down to consider how reducing the inputs to military readiness will also reduce the outputs.

None of those factors in the military readiness equation are negotiable; and U.S. military dominance and its concomitant benefits are neither assured in perpetuity, nor a given even in the near-term, if we allow our military readiness to continue to vacillate. A force not ready to project strength and decisively engage our enemies and other challenges to our national interests, whenever and wherever the needs arise, is a force with no force at all. Readiness alone will not win; but without it, we can neither defeat nor deter our enemies, neither defend nor assure our allies and partners, neither advance nor even merely protect our own national interests. Calling an un-ready force “hollow” gives it too much credit.

A New and Personal Narrative of Who ...