Does Transnistria Matter? To Russia, It May 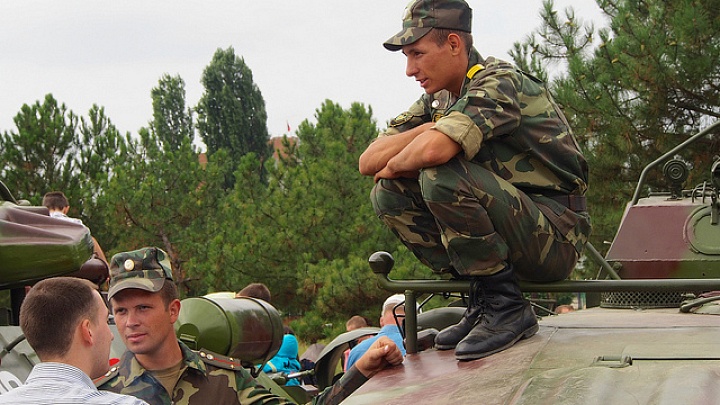 Mention Transnistria and most people will look at you sideways. It is a funny word, the name of this place that exists but for a small population. Officially, Transnistria is still part of Moldova. To a half-million Russian speakers in the east bank of the Dniester River, it is an independent republic.

Upon the collapse of the Soviet Union in 1991, Moldova declared its independence, but not before Transnistria beat them to the punch. A year earlier, the pro-Soviet population in eastern Moldova proclaimed themselves the Pridnestrovian Moldovian Soviet Socialist Republic (PMSSR) with the hope of remaining part the Soviet Union. Despite the PMSSR wanting to remain part of Russia, the Russian government failed to recognize the republic as legitimate. War broke out over Transnistria, during which Russia’s 14th Army backed the separatists. There had been smaller skirmishes going back to 1990, but fighting intensified in late 1991 and into 1992. Supported by the Russian army, Transnistrian separatists held their claimed territory. A ceasefire was finally signed in July 1992. The Russian 14th Army, along with Moldovan forces, make up a peacekeeping force in the region. The only problem is that it was supposed to be temporary.

Russia’s 14th Army is still stationed in Transnistria. It is not a very big show of force — about 2,500 troops — but it does present a problem and a threat to the region. During an Organization for Security and Co-operation in Europe (OSCE) summit in Istanbul in 1999, Russia promised to withdraw its troops from Transnistria by 2002. As long as the 14th Army stays put, Moldova has little to no chance of joining NATO. Russian President Vladimir Putin has said as recently as December 2014 that NATO is the biggest threat to Russia. Putin has frequently cited the presence of troops or weapons in the countries bordering Russia to be a direct threat. However, Moldova becoming a NATO member is only talk at this point; Moldova’s constitution does not allow it to join military alliances. As recently as September 2014, Moldova has said there are still no plans to join NATO.

It may not be that Transnistria itself matters, but what it represents: Russia’s expanding influence in Europe.

After the annexation of Crimea in March 2014, Transnistria thought they could be next. Despite having a mixed population of Moldovans, Russians, and Ukrainians, Transnistria still considers itself a Russian republic. Even if “little green men” do not appear to aid Transnistria in their wish to secede from Moldova, the fact that the Russian 14th Army is in Transnistria ruffles feathers. Just being in Moldova keeps Russia in the periphery of the former Eastern Bloc. Simply put, having one of Russia’s frozen conflicts in the region causes the unease of not knowing if the standoff could suddenly become hot. If the conflict were to flare up again, it is possible that Romania could come to the aid of Moldova. Romania is Moldova’s largest ally in the region, as well as a member of the European Union. This is a scenario that Russia would not want because Romania is also a NATO member and any military action against Romania by Russia would invoke NATO’s Article 5.

It bears mentioning that Moldova was part of Romania until the Soviet Union annexed them in 1940.

The bigger threat may be not to Moldova but to neighboring Ukraine. Having Russian military forces on Ukraine’s western border would make an easy start of a western front especially if they are aided by local sympathizers. But given the current situation in Ukraine and the state of the Russian economy, the likelihood is small but not completely out of the question. If the war in Ukraine were to escalate further, the Army’s location would allow Russia to launch a western offensive toward Odessa, a prized port on the Black Sea and current home of the Ukrainian navy. Odessa in one of the key points to the idea of Novorossiya (New Russia) something that has been mentioned off and on since the annexation of Crimea. Launching an attack from the west may be a way to divert Ukraine’s precious military resources away from the fighting in the east, giving the advantage to the Russians and the local fighters who are slowly making gains westward, despite having agreed to a ceasefire.

So it may not be that Transnistria itself matters, but what it represents: Russia’s influence in Europe, specifically the former Eastern Bloc countries. Moldova recently signed an association agreement with the EU. Russia responded by stopping exports from Moldova. Nearly half of Moldova’s exports go to the EU, while about one quarter go to Russia. It was 15 months ago when Ukraine was set to sign their EU association agreement until then-President Viktor Yanukovych bowed to Moscow’s pressure to join a trade agreement with them instead. It was this move that spawned mass protests against the Ukrainian government in Maidan Square. So far, Russia is focusing all their efforts on eastern Ukraine but as they make more territorial gains there they could become emboldened to try for the west. That could very well mean stirring up the population of Transnistria and making the conflict hot once more.

This post originally appeared in The Eastern Project on 23 February 2015.

Brandee Leon is a student of counter-terrorism and international relations. She writes for The Strategy Bridge and The Eastern Project.

The Secret Speech and Putins Cult of ...