The Battle for Bayji, and the Heart of Iraqs Oil Industry 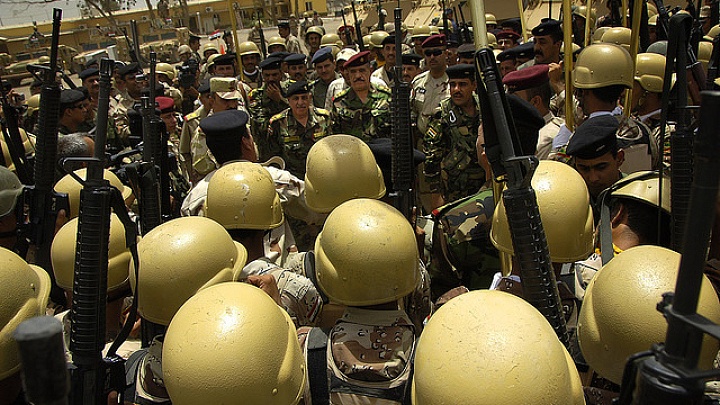 The Bayji Oil Refinery represents a lot of things for me. When I was first deployed there in 2005, the only thing it initially meant was the pungent smell of petroleum I thought I would never get over. But I quickly grew used to it, among other things. The refinery would be the location of the first improvised explosive device (IED) to hit my vehicle and the place that I would spend the majority of my hours “outside the wire” in an effort to write detailed reports about the inner workings of the refinery and the people who worked there. It far outweighed anything else I did for the next year.

When I visited various villages surrounding Bayji the children from other towns always said, “Bayji bad” and gave me the thumbs down. Recent battles between ISIS and Iraqi government forces seem to confirm that sentiment that Bayji is indeed a bad place. The Battle for Bayji between ISIS and Iraqi government and militia forces has been ongoing intermittently since November 2014. However, after the most recent battle in Tikrit ended in early April, ISIS has attempted to gain control of the Bayji Oil Refinery in a new offensive, begun on April 11, 2015. As the largest refinery in Iraq, Bayji Oil Refinery is an important source of power and money for ISIS, the Iraqi government and for local interests.

The first report I wrote on the refinery was rejected. It was not considered a major interest for the U.S.-led coalition at the time. When I left Bayji a year later, the U.S. military position on the importance of the refinery had reversed. An infantry company would be embedded there in an attempt to monitor widespread corruption and, hopefully, stop terrorist financing.  In my mind, there is no doubt that Bayji is strategically important. Therefore, it was no surprise Joint Chiefs Chairman General Martin Dempsey stated the same five days into the most recent battle for the refinery.

Bayji Oil Refinery, the largest in Iraq and lying along the primary supply route separating ISIS-controlled points to the north of Baghdad, is of great strategic importance for both government and ISIS forces.

General Dempsey upset many people with his remarks about the strategic differences, or lack thereof, between Bayji and Ramadi. Although his phrasing may have been questionable, it cannot be denied that the largest oil refinery in Iraq lying along the primary supply route separating ISIS-controlled points to the north of Baghdad is of strategic importance. Regardless of Dempsey’s remarks and strategic importance, Ramadi is also of great symbolic importance, especially to those who fought there and quite obviously to the vital pockets of Sunni support against ISIS that exist there. Many assumed Dempsey’s remarks meant there was no coalition support for Ramadi, when in fact there have been continuing coalition airstrikes in Ramadi. At least one source suggested the ISIS attack on Bayji was a strategicmove and part of an effort to distract coalition attention from their base in Anbar.

However, I believe ISIS understands how important the oil refinery is to local and national Iraqi interests and is not wasting manpower on a simple diversion. In any case, the chances of depending upon Bayji as a reliable source of oil and income are lessening daily for either side due to ongoing attacks on facilities and infrastructure there.  ISIS and the Iraqi government aside, even with reduced reserves, the majority of the local population still depend on its ability to provide some gasoline, cooking oil, and a power supply to the local power company.

Once the April 11 attack on Bayji began, it was clear it was well-planned and complex. ISIS publicly disclosed it was using drone capabilities to monitor activity at the refinery for real-time battlefield assessments, a capability they have claimed to have since last year. These claims were not mere propaganda, but supported by outside assessments. ISIS began their attack with a suicide bomber, the first of many such attacks against the refinery. Suicide attacks, regardless of perpetrator, have again become standard in Iraq since ISIS emerged. In 2014, suicide attacks in Iraq increased nearly 200%. The attack was opened simultaneously on multiple fronts and ISIS was careful to camouflage their artillery pieces from coalition aircraft.

Overall, the ISIS strategy appears more sophisticated than the oft-used “spray and pray” methods used by Iraqi security forces. On their own, Iraqi government forces would likely be far out-maneuvered by ISIS. However, over nine days coalition aircraft conducted 47 airstrikes in and around Bayji, which certainly helped turn the tide in favor of the government forces.  On April 26th, as ISIS continued their siege of the refinery, it was suggested that they intentionally set fire to multiple oil wells in an effort to disrupt further air support to the Iraqi forces. At the time of writing, ISIS attacks on the perimeter of Bayji continue, including a high-profile suicide attack conducted by a 14-year-old cousin of Abu Bakr al-Baghdadi.

During my time in Bayji, a member of the Sunni Ubaydi tribe was in charge its security. At one of our early meetings he told me about a Shia staff member who had been killed and how everyone, regardless of sect, was very upset. At the time, in 2005, I was told that one of the unique characteristics of Bayji is that it was an industrial city where Sunni, Shia, and Kurds worked together to run the state-owned industries: Oil, electric, and chemical.

Initially it seemed true, as the major schism in Bayji was between the Ubayd and the Jubur tribesman that dominated the area for control of the refinery and local government. It was as if non-Sunni residents were of no concern at all because they were not power brokers. The bombing of Samarra in February 2006 changed everything. Suddenly the north-south route through Iraq was flooded with overpacked vehicles of Shia fleeing northward to theoretical safety. Soon after there was a mass murder of Shia at Bayji as they left their job at the electric plant for the day. The landscape changed.

Since 2006 I do not know how the tribal and sectarian schisms have played out, but I assume the Shia and Kurds did not fare well.  When ISIS came to Bayji, they were quick to highlight the Shia militants they killed, which is to be expected from a militant Sunni group. ISIS is also quick to kill any Sunni tribesman that work against them. One of the first victims of the April 11 attack was the most recent head of the refinerys security, General Dheif Ayoub al-Tai, who was not from one of the dominant Bayji tribes and likely appointed by Baghdad. His death leads me to suspect the local Ubayd and Jubur, pushed out of control of that critical position, were not disheartened to hear of his passing and possibly encouraged it.

For me, reading that General al-Tai had been killed (and not another name I knew) means Bayji has transformed into a place I would be unlikely to recognize. Over the past nine years I have often wondered about the people I met at the refinery, some of whom I even hoped to see again one day. I hope they are still alive, that they left Bayji, or even Iraq altogether.  Yet, I still must wonder if they are still there or even helping ISIS?  As this is published, it is still unclear who will be in control of the refinery. For now, as the battles continue, I see little hope for the people of Bayji or for the refinery as every attack by ISIS or the coalition leaves less hope it will be of much use for whichever party eventually controls it.  However, the geographic position and potential income and power it holds mean it is too strategically important for either side to yield it to the other. It will be a long road to recovery and, for Iraq, that recovery will be based on oil.