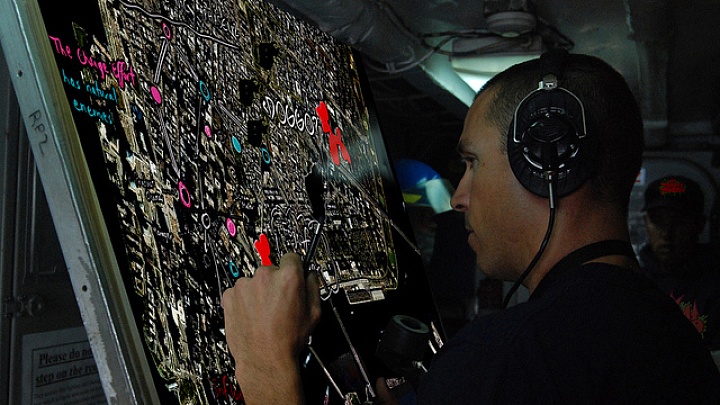 It is a Sunday morning in Kapisa Province, due north of Kabul. A local Tagib market has just opened, and merchants tend to their stalls as villagers come and go. The skies are unusually clear, and over the buzz of the marketplace, a faint hum can be heard from far off. Unbeknownst to those on the ground, the hum resonates from some 10,000 feet overhead A US-operated Predator drone. But on this Sunday  morning, US forces arent looking for insurgents, tracking HVTs, or preparing for ground operations the drone isnt even carrying weapons. Instead, it is armed with high-resolution cameras and is live-streaming footage of the marketplace back to the continental United States where a team of data analysts are carefully monitoring the ebb and flow of customers into and out of the market, adding their findings to an ever-growing, time-dependent dataset. Greater foot traffic in the market means that villagers are more comfortable leaving their homes without fear of violence an indication that the security environment is increasingly stable.

With data on activity in the marketplace, researchers are hoping to develop a metric by which to measure the health of the local Kapisa economy and build a leading indicator of success in both armed conflict against insurgency in the region and success of post-war reconstruction efforts. Trends like these, then, can be used to demonstrate that US security and development action on the ground is effective in combating and diminishing insurgent control. While this scenario might sound far fetched, its not as distant as you might think. Methods like this are the new strategies being used to measure victory and success in the 21st century battlespace.

New research like this has stemmed from a need to redefine victory in warfare for the past half-century; What is victory in hybrid warfare? When have you actually beaten the insurgents? Where is your threshold for success? Gone are the days when wars were fought and won off the metric of human capital. Lives taken provides a poor measure of victory in war when the enemy youre fighting is asymmetric, ideologically rooted, and highly fluid in numbers. Killing 50 enemy insurgents looks great on the chalkboard, but what is the effect? And what about the civilian casualties incurred when eliminating those targets? Due to the decentralized structure of insurgencies like the Taliban, the young men firing at US convoys or planting roadside IEDs often mean very little to the organization theyre paid a small lump sum in exchange for their services. Additionally, the US airstrikes and ground operations that eliminate these targets often indiscriminately harm civilians. As General Stanley A. McChrystal famously theorized in his insurgent math framework, killing civilians only breeds more fighters. So is the death of 50 insurgents really a victory, and is it actually effective in diminishing the insurgency, or is it causing more harm than good? Suddenly, the waters become remarkably murky when looking at victory through a conventional framework.

A new definition of success in todays counterinsurgency wars will provide both an answer to the public and a spectrum by which to gauge the efficacy of security and development strategy.

For modern LeMayans, however, this might be a bitter pill to swallow Why bother with the semantics of war? The answer to this question is two fold.  First, towards the end of the war in Vietnam, the public had grown tired of combat. It was the first war where both news and results were broadcast on live television for mass civilian consumption. Individuals back home had real time access to the costs of war and it proved to be not only shocking, but incredibly empowering as well. By the end of the 1970s, public opinion had become a major factor in determining U.S. foreign policy. As the United States pushed into the 1990s and beyond with the Gulf War and wars in Iraq and Afghanistan, the ever watchful eye of the American public became increasingly interested in the returns of warfare. For the modern, hybrid wars from Vietnam and onward; there hasnt been a good answer. Nobody really knows what winning looks like today, and were not certain that our security strategies will be effective in the long run.

Secondly, when security and development strategies are put into place, governments and private institutions hedge hundreds of millions of dollars on their outcome. How does a large corporation with a half-a-billion-dollar security contract with the military provide accountability for its actions? As of right now it largely cannot. There is no simple way to connect wartime investments to their returns because there exists no reliable metric to measure wartime trends of success or failure. This has led to tremendous money vacuums, particularly in Iraq and Afghanistan as US policymakers give security and development efforts their best shot. For decades, we didnt know whether arming rebels to combat insurgents was effective or not, but we tried again and again.

Fringe research focused on data in the battlefield provides an exciting new horizon for the future of US security and development work. David Kilcullen, in his 2010 book titled Counterinsurgency, outlines a number of these alternative methodologies for measuring success. Monitoring exotic vegetable prices, for example, provides a cross-sectional snapshot of both the economic and security environment in Afghanistan. As he explains, exotic vegetables those grown outside a particular district that have to be transported further at greater risk in order to be sold in that district may [provide] a surrogate metric for general popular confidence and perceived security. Also on the list is a suggestion for tracking the sleep locations of local government officials if a local official doesnt feel safe sleeping in his own district for fear of discriminate victimization, he will often times return to stronghold positions like Kabul for the nighttime. By tracking the rate of these nocturnal exchanges, we can develop a perspective on the security and stability of individual districts and measure trends in insurgent or coalition influence and control.

Its asymmetric warfare being redefined by abnormal methods a befitting solution in a war-space that is so little understood. The research methods are endless, and their applicability to redefining success for both security and development efforts are substantial. A new definition of success in todays counterinsurgency wars will provide both an answer to the public and a spectrum by which to gauge the efficacy of security and development strategy. A more effective allocation of the hundreds of millions of dollars and immeasurable resources that go into modern warfare and reconstruction can be achieved once we are able to simply understand what works and what doesnt, bringing an end to the guessing game that has dominated US foreign policy for the last 40 years.

Jordan Bravin is an undergraduate at Yale University, an NROTC Midshipman, and an editorial intern with Cicero Magazine. His opinions and comments are the author’s own, and not endorsed, supported, or verified by the Department of Defense, Department of the Navy, or any other association.

Why We Haven’t Felt the Full Effect ...